A lot has happened after the release of my 3rd CD “Third Time’s a Charm.”

I continue to play the piano primarily in a trio, but now occasionally a quartet. Dave Rogers is on drums. Brian Wolverton is on bass, and now Danny Fletcher plays some tunes with us on guitar. I continue my medical practice as a family doctor, but love music too. Medicine IS life to many people. I think music is the spice of life to everyone. I continue to want to do both.

Since  2010 we have completed our new CD “New Directions,” released in 2014.  It’s a widely varied CD that contains jazz, blues, some classical arrangements of mine, and some vocals I’ve written  and found some good singers to sing. 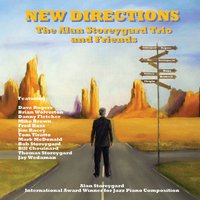 “Dancing With the In Crowd” is a jazz auto-duet where I’m playing my arrangements of “Dancing In the Street” and my arrangement of “The In Crowd” at the same time on two different pianos,  one through the right speaker and the other through the left speaker – accompanied by my drummer Dave Rogers and bassist Brian Wolverton. I’ve never heard another piece like this one.  It’s a very fun piece, and I think you’ll like it.

“Variations on Chopin’s Ballade #1 in G Minor” combines themes of three Chopin pieces with some other ideas of my own.  It’s such a beautiful piece by Chopin.  I wanted to do my own arrangement.

“The Star Spangled Banner with Italian Ending” is an unusual version of The Star Spangled Banner. I wrote it while I was in Italy (Sicily). We were invited to play this in Carnegie Hall in 2011. It was written for an international audience initially in 2006 and played again for an international audience in 2011. America continues to be involved throughout the world.

God’s Gift (the Bible in 153 Words)”is what the Bible says to me put to music, It’s sung by a friend of mine Mark McDonald to an original piano composition of mine.

Tom Tiratto sings another original song of mine “Remembering You.” Everyone has someone special to remember. Tom has a unique and exceptional voice. He sounds so much like Frank Sinatra, and he performs Sinatra tribute shows.

The title song of this CD, “New Directions,” was written by me and my son Thomas, and was performed by some wonderful friends of mine in the style of BB King. It’s written for anyone trying to find a new direction in their life.

I think you will find each of these pieces special in their own way. While my primary musical focus for decades has been jazz, I took many new directions on this CD. I hope there is something for everybody on this CD.

All of these pieces are available on iTunes, Amazon, www.cdbaby.com, and www.skybluemusic.com.